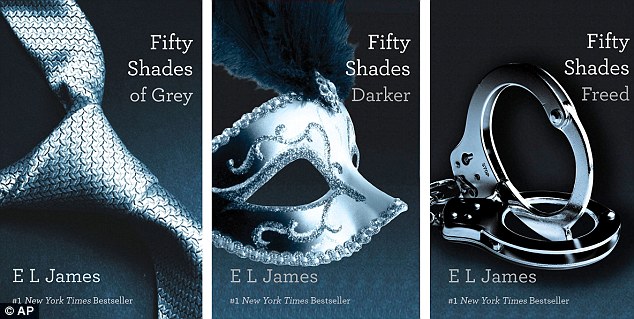 Fifty Shades of Grey. Everyone knows it, regardless of whether they’ve read the books or watched the movies. So everyone seemingly has an opinion on it, very often in the negative:

It’s hard for most people to fathom that there ARE some fans of this franchise out there. But they do exist. This article – from CNN of all places – is a pretty smart account of the phenomenon and HOW this series grabbed the limelight in the way it did at the beginning (in comparison to those, like me, who bought and read the book because of curiosity as a direct result of the phenomenon).

Won’t anyone think of the kids?

These people campaign on this basis, to bring their message to 50 Shades fans that relationships are supposed to be healthy and not power trips (a message I obviously agree with). But even so, broken down what we have here in effect is, ‘Won’t anyone think of the kids????’

Well, let’s ask one. This Facebook post was written by a young person, who says she was just eighteen when she read the book. At the time of writing this blog post, it’s been shared in excess of 43K times. I expect it will be shared even more – I keep seeing it pop up in my timeline. So, here’s what she thinks of Fifty Shades and why, in detail: 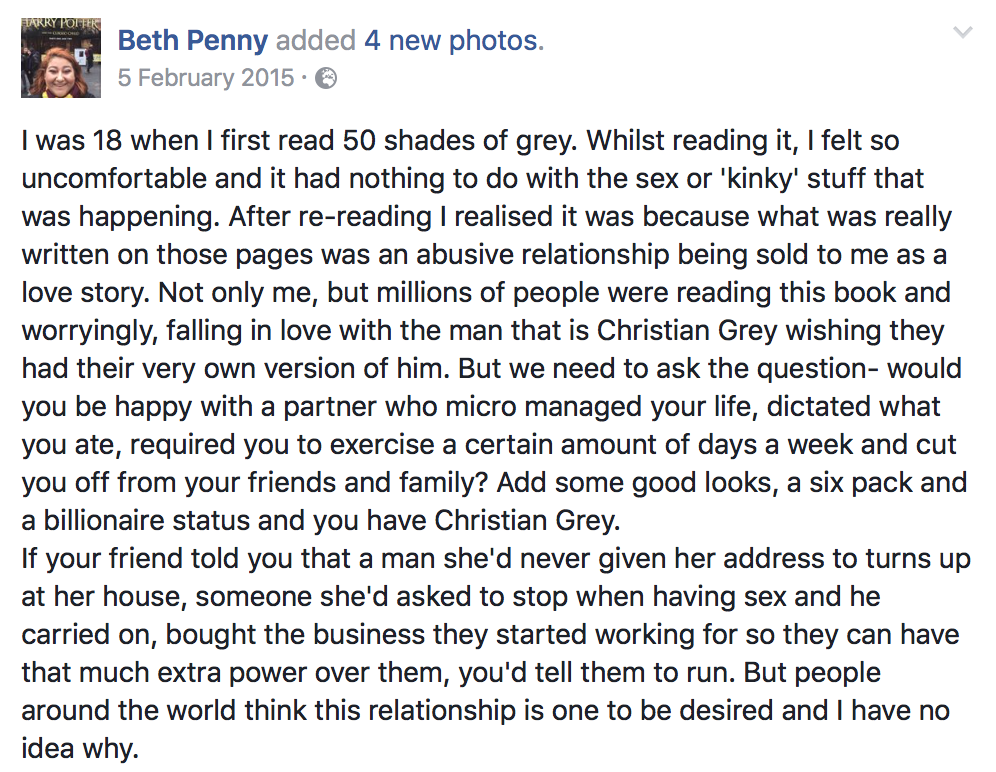 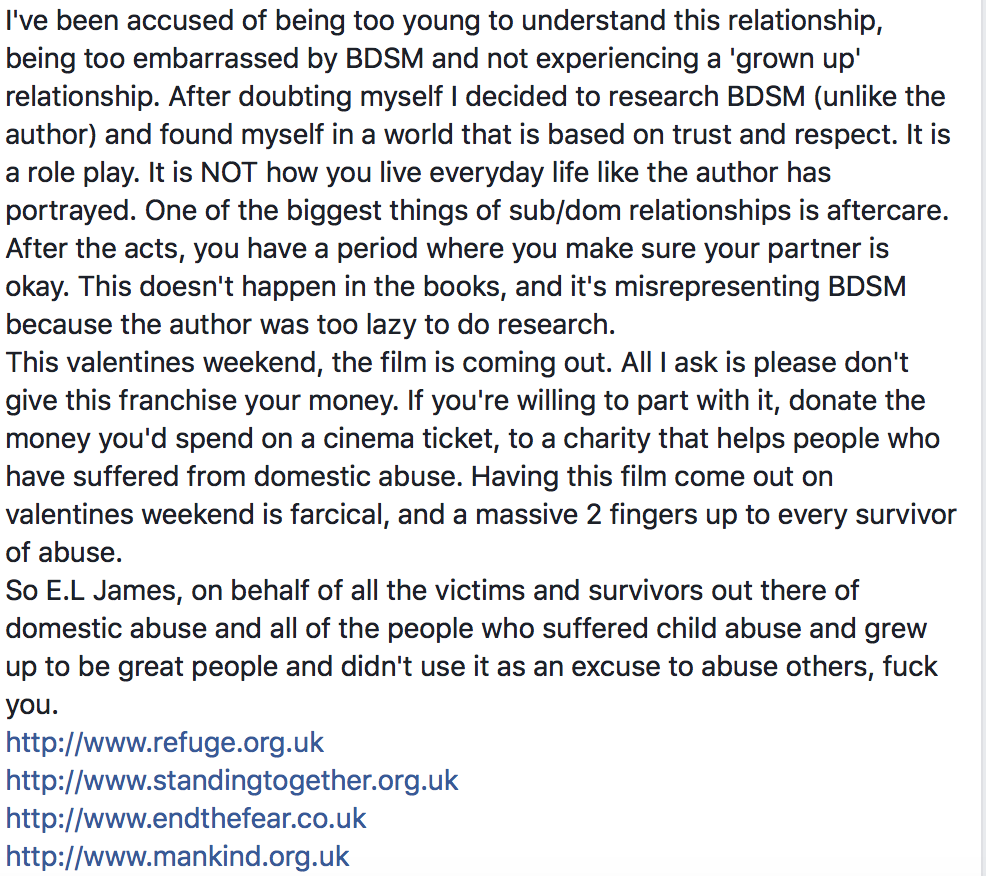 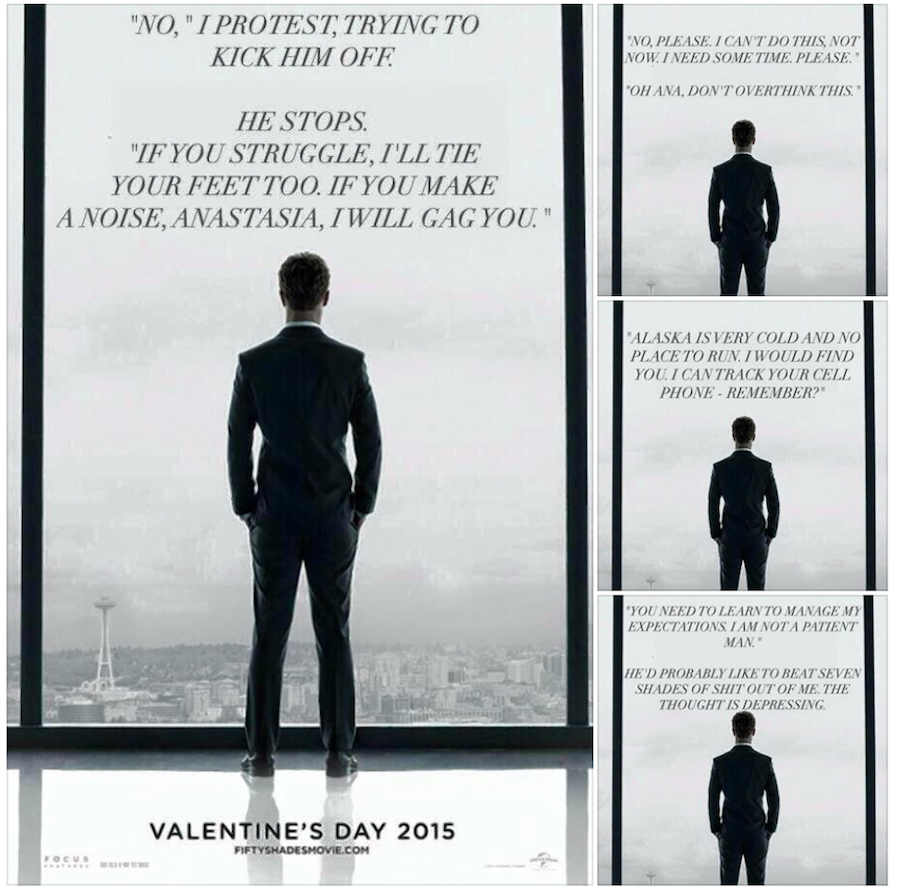 So, in her own words, the likes of Beth Penny – very young at the time of reading Fifty Shades of Gray – is perfectly able to read and think critically about the content of a book like this. She demonstrates she is not some passive vessel, sucking up EL James’ dodgy story. Instead, Beth Penny crafts compelling reasons for why she thinks this book sucks and even offers a call to action to others to boycott the film version and do something positive with their cash instead. Good for her.

—What of young people who CAN’T think critically about the likes of Fifty Shades of Grey, like Beth Penny? Maybe because the model of relationships they’ve seen at home is not healthy?

Unfortunately, it’s not as simple as ‘saving’ kids and young people at risk like this, by banning or even just calling out books like Fifty Shades of Grey. Even a rudimentary knowledge of psychology tells us that a child’s formative years is the most important (long before they read or watch anything!).

This means young people’s primary influence will be the state of their parents’ relationships, both with each other and the world at large. So young people who have grown up in dysfunctional, or even toxic families have a massive disadvantage when it comes to understanding how relationships work.

Whilst it might seem advantageous to get rid of works like Fifty Shades from the mix then, in real terms it’s not even the tip of the iceberg. It’s not on the radar. These people have far more against them in finding their way in the world than some shitty book.

On top of all this, Fifty Shades of Grey is the very epitome of the old marketing saying, ‘There’s no such thing as bad publicity’. This means, the more concerned citizens call it out or actively campaign against it, the more money it makes … Because humans are curious creatures and they can’t help themselves when everyone is talking about something.

Hell, as I’ve already mentioned, I even bought the book because of the bad publicity! (It’s still at 45% on my Kindle, but EL James and the publisher still got my money. And that’s the key).

So, the only meaningful thing we can do is be quiet.

That’s right — we have to shut the hell up!

It’s the only way to stop a phenomenon like this in its tracks. Deny it space. Make it irrelevant.

Do I like Fifty Shades of Grey, or its success? Hell no.

Will I be talking about it in detail, after this article? Nope. The phenomenon already has the oxygen of publicity, for good AND ill – so I won’t be adding to it further.