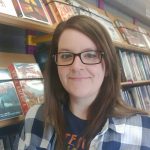 Hi, my name is Gemma Todd (@gemtodd on Twitter). My debut book, DEFENDER, is being published under my author name G X Todd on 12th January 2017 by Headline and it’s the first in a four book post-apocalyptic thriller series.

You can find a full description of it and pre-order yourself a copy on Amazon. Or, if you want to get your hands on a signed and numbered Special Edition copy a whole five weeks before publication, head over to Goldsboro Books where it’s Book of the Month for December. It’ll have fancy shmancy sprayed gold edging, too.

DEFENDER is set seven years after a major breakdown in society, where a mass appearance of internal voices convinced a large percentage of the general population to either kill themselves or each other. We are left with a world torn, its survivors divided between those who hate voices and those who fear them.

Sixteen-year-old Lacey has been living a sheltered existence in her grandmother’s farmhouse, but when her grams dies, Lacey decides it’s time to travel the six hundred dangerous miles to find her sister. She can’t do it alone, and so enlists the help of Pilgrim, a taciturn, cantankerous loner. Unbeknownst to Lacey, though, Pilgrim hears a voice of his own and he isn’t the only one… 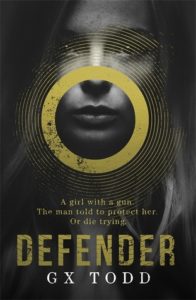 There are certain themes that insist on creeping into 90% of my writing. They can be boiled down to the following three: complete and utter loneliness (hence the post-apocalyptic setting – you can’t beat everyone being dead for loneliness), the psychology of violence, namely why humans commit such gross acts of violence against each other (I’m fairly fascinated with serial killers and the like), and the primal urges locked up inside us, which break free once societal constraints have been stripped away.

For The Voices series, I did a lot of research into human consciousness (I use a nifty quote from Julian Jaynes in DEFENDER, the fella who originated the Bicameral Mind theory), suicidal ideation, auditory hallucinations, and mental illness. The research has been an eye-opening and frankly terrifying experience.

This is where writers across the country will draw in a collective gasp of shock. I don’t have a routine. I’ve tried, a few times, to draw up a super organised writing timetable. Spreadsheeted that shit and everything, but it’s never stuck. I write when I want to (translation: not in the mornings). I sometimes have days where I work for twelve hours solid and other days when I work for no more than two and then go play video games. I work very hard when deadlines are approaching, and I kick back for a couple of weeks and don’t do much after I’ve met those deadlines. It’s quite a fluid thing for me. I am, however, going to use the NaNoWriMo template this year, if only to get my butt in the seat and get some words down every day this month. I doubt I’ll hit the 50,000 words, but I’d be happy with 30-40,000.

5) Which dystopian book do you wish YOU’D written, and why?

I’m not sure it can be called dystopian, but I really, really love AMERICAN GODS by Neil Gaiman. I was a latecomer to this book and I don’t know why. Maybe I looked at that massive tome of a novel and thought Holy crap, that’s going to take me an age to read. In fact, it took me little more than a week. It defies category, which in itself is awesome and something I wish I could do. It’s also allegorical and full of magic and it takes you through a very dream-like America inhabited by dying gods, and there’s an argument that the US can be called a dystopia of sorts with the ways things are heading, so yep, I choose AMERICAN GODS. I wish I could write something as unique and imaginative and yet still catch the imaginations of millions readers worldwide.
Oh! Can I mention Wyndham’s THE CHRYSALIDS, too? He’s most well-known for THE DAY OF THE TRIFFIDS but THE CHRYSALIDS is a real speculative dystopian tale and I think it’s his best.

6) What’s the ONE thing our current society should stop doing in your opinion, else we’ll end up in a dystopia too?

Being glued to our mobile phones. I drive a 35ft long mobile library as part of my day job and countless times every day I see people on their phones while behind the wheel. I also see them transfixed by their phones instead of talking to the checkout guy/girl in the supermarket. I see Moms chatting to their besties on the phone while walking down the street rather than interact with their own kids. We’re going to turn into either 1) an anti-social nation full of citizens who don’t give a shit about each other, or 2) a Death Race, demolition style road wars nation, à la Mad Max, with drivers mowing down people in the street.

If you want to be one of two possible winners of a hardback copy of the awesome DEFENDER, then get over to our Facebook page Crime,Ink and follow the instructions for your chance to win. GOOD LUCK!