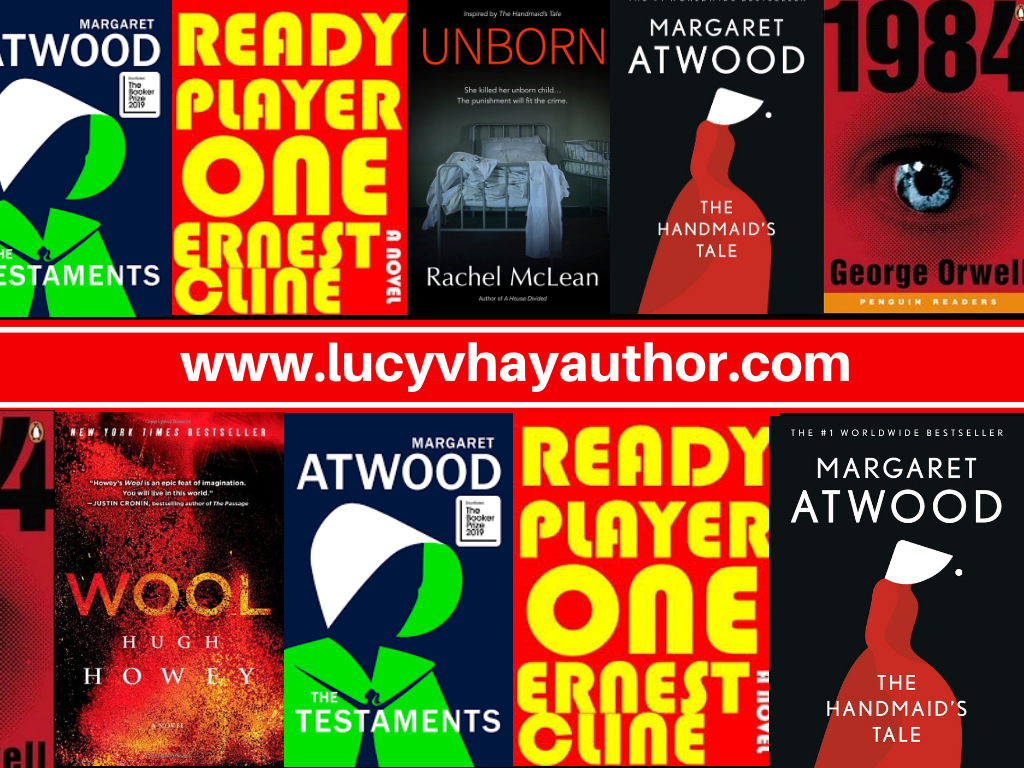 As long-time readers of this blog know, I LOVE dystopian fiction! So I’m delighted to welcome author Rachel McClean to share her top 5 as part of her blog tour. Check out Rachel’s picks and her novel, Unborn, at the bottom of the post. Enjoy!

1) The Handmaid’s Tale by Margaret Atwood

I read this many years ago but have been revisiting it via the TV adaptation. It’s the chilling tale of Offred, a woman whose role is to be a Handmaid in a state called Gilead, that’s been formed from the US after a religious coup.

With everything that’s been going on in the US in recent years, and the threat to women’s reproductive rights, there are millions of women worried that something like this could come true. And Atwood herself has said that she made nothing in the book up. It’s all based on events that have happened somewhere at some time.

‘I believe in the resistance as I believe there can be no light without shadow; or rather, no shadow unless there is also light.’

Offred is a Handmaid in The Republic of Gilead, a religious totalitarian state in what was formerly known as the United States. She is placed in the household of The Commander, Fred Waterford – her assigned name, Offred, means ‘of Fred’.

She has only one function: to breed. If Offred refuses to enter into sexual servitude to repopulate a devastated world, she will be hanged. Yet even a repressive state cannot eradicate hope and desire. As she recalls her pre-revolution life in flashbacks, Offred must navigate through the terrifying landscape of torture and persecution in the present day, and between two men upon which her future hangs.

Masterfully conceived and executed, this haunting vision of the future places Margaret Atwood at the forefront of dystopian fiction. MORE: Book Versus Film: The Handmaid’s Tale

Big Brother is watching you. With CCTV cameras on every corner and a recent BBC drama hinting that MI5 could be watching us via our Smart TVs, the dystopia of 1984 could be truer than we imagine.

I was set this book as a school text aged twelve. We were told to go away and read the first chapter over the weekend. I started reading and didn’t put the book down until the final page. It’s a gut-wrenching, compelling book that makes you hope, imagine and cry.

Hidden away in the Record Department of the sprawling Ministry of Truth, Winston Smith skilfully rewrites the past to suit the needs of the Party. Yet he inwardly rebels against the totalitarian world he lives in, which demands absolute obedience and controls him through the all-seeing telescreens and the watchful eye of Big Brother, symbolic head of the Party. In his longing for truth and liberty, Smith begins a secret love affair with a fellow-worker Julia, but soon discovers the true price of freedom is betrayal.

3) Ready Player One by Ernest Cline

If you’ve got teenage kids (or you are one), you’ll know how all-embracing the internet has become for that generation. This book takes things as etc further. People live inside the OASIS, a virtual reality game that’s a much nicer place to live than the real world.

As more and more of our online and offline activities become gamified via apps and social media (anyone ever gone somewhere because of the #instagrammable nature of it?), this isn’t too far from what the world could look like if we let it.

It’s the year 2044, and the real world has become an ugly place. We’re out of oil. We’ve wrecked the climate. Famine, poverty, and disease are widespread.

Like most of humanity, Wade Watts escapes this depressing reality by spending his waking hours jacked into the OASIS, a sprawling virtual utopia where you can be anything you want to be, where you can live and play and fall in love on any of ten thousand planets. And like most of humanity, Wade is obsessed by the ultimate lottery ticket that lies concealed within this alternate reality: OASIS founder James Halliday, who dies with no heir, has promised that control of the OASIS – and his massive fortune – will go to the person who can solve the riddles he has left scattered throughout his creation.

For years, millions have struggled fruitlessly to attain this prize, knowing only that the riddles are based in the culture of the late twentieth century. And then Wade stumbles onto the key to the first puzzle.

Suddenly, he finds himself pitted against thousands of competitors in a desperate race to claim the ultimate prize, a chase that soon takes on terrifying real-world dimensions – and that will leave both Wade and his world profoundly changed. MORE: Book Versus Film: Ready Player One 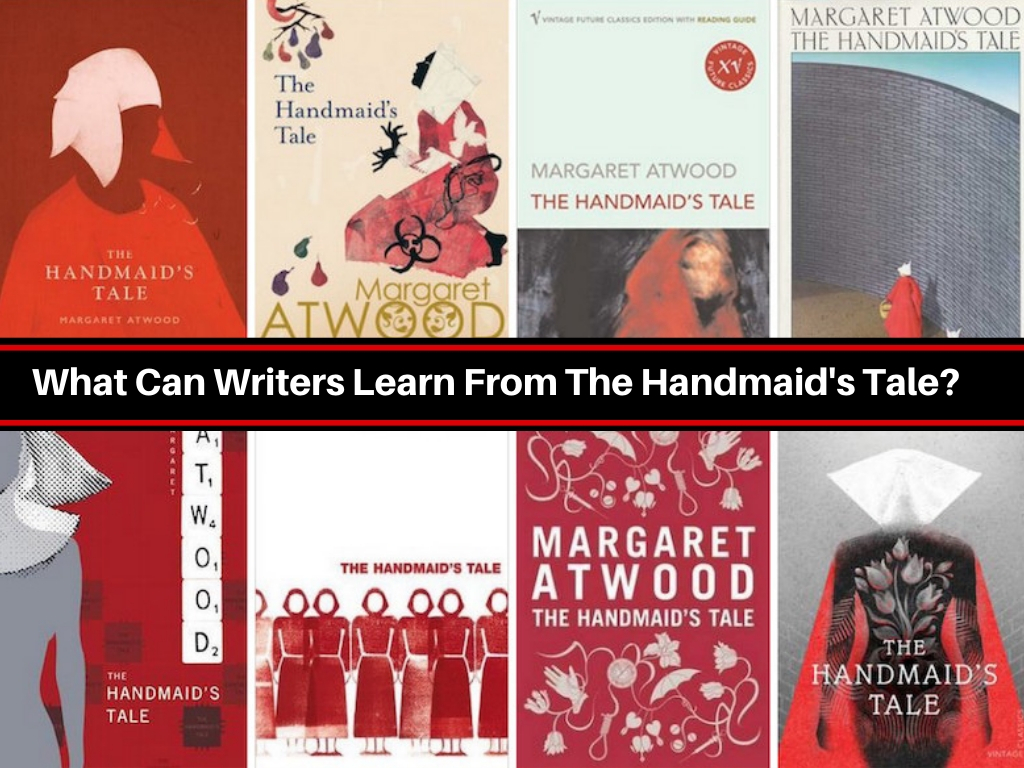 4) The Testaments by Margaret Atwood

I have to admit I started reading this book with some trepidation.

What if Atwood had lost her mojo? What if the book was a pale imitation of its predecessor?

Instead of following Offred, we get to meet three more women, two of whom are girls at the beginning of the book, and one of whom is someone we love to hate from The Handmaid’s Tale.

I’m not going to spoil things too much by telling you that one of the POV characters is Aunt Lydia. The dreadful, cruel Aunt Lydia who seems to relish inflicting pain and humiliation on the poor women at the Red Centre.

The other characters were interesting too. By following a girl brought up in Gilead and another girl raised in Canada, we see in sharp focus the way Gilead indoctrinates its girls and moulds them into the young women it expects them to be.

And there is a hinted Offred link…

All in all, The Testaments is a fabulous book. It enhances our understanding of Gilead, moves the wider story forward, and fills in the gaps left at the end of The Handmaid’s Tale.

Wool was a publishing phenomenon. Howey serialised it, finding an audience and then selling big when he released the stories as one book. It was one of those books that marked the beginning of serious indie publishing.

But it’s also a great book.

It takes place in a silo, a future society underground, where no one is allowed outside – except those who have broken the law. They are sent out as ‘cleaners’, with the task of cleaning the view screen other residents use to see the landscape above their cavernous home.

Truly disturbing and utterly compelling, I enjoyed this book so much I carried it everywhere with me until I was finished. And then I went out and bought the sequel. MORE: 7 Great Utopian Books We Should All Be Reading

About Unborn by Rachel McClean

She killed her unborn child. The punishment will fit the crime.

America, 2026.
Feminism has been defeated.
Equality is a memory.
And abortion has been criminalized.

Three women find themselves on the wrong side of the law.

Kate, carrying the child of a sexual predator.
Grace, whose baby will be born with a fatal deformity.
And Cindee: abused, abandoned and pregnant.

Can these three very different women come together to fight an oppressive system and win their freedom?

Find out by reading Unborn, a chilling dystopia combined with a gripping legal thriller. 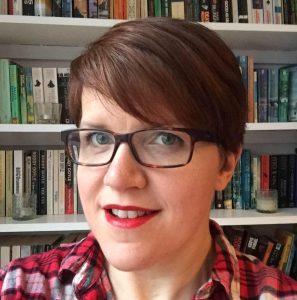 My name’s Rachel McLean and I write thrillers that make you think.

What does that mean?

In short, I want my stories to make your pulse race and your brain tick.

Do you often get through a thriller at breakneck pace but are left with little sense of what the book was really about? Do you sometimes read literary fiction but just wish something would damn well happen?

My books aim to fill that gap.

If you’d like to know more about my books and receive extra bonus content, please join my book club at rachelmclean.com/bookclub. I’ll send you a weekly email with news about my writing research and progress, stories and bonus content for each book. And I’ll let you know when my books are on offer.